The Two Sides of Monsieur Valentine

A favorite complaint about Valentine’s Day is that it is a “manufactured holiday,” created by corporations interested in selling more greeting cards, chocolates, teddy bears, and all manner of pink, white, and red heart-shaped decorations. For the single and the non-celebratory, it is understandable that Valentine’s day can rankle; is it a real holiday, after all? What’s the point?

Like many holidays, it is intended as a reminder. The routine of daily life distracts us from things that are important to us – the relationships and events and connections that define and enliven us. Religious holidays exist to remind us of our faith, while birthdays exist to remind us to celebrate our friends and family and their continued existence in our lives. Valentine’s Day, of course, exists to remind us to honor and celebrate the love we share with a significant other. Romantic gestures can seem cheesy, but most people appreciate being shown that you care about them.

Of course, Valentine’s Day wasn’t always that way – its origins are far stranger, and at times, darker than the holiday we experience today. Yes, that’s right – Valentine’s Day didn’t spring into being the day Hallmark realized it could make obscene amounts of cash off its greeting cards. The holiday dates back hundreds of years, in fact, to the days of ancient Rome…

Explore more infographics like this one on the web’s largest information design community – Visually.There Ain’t No Party Like a Roman Party

The Romans had a lot of holidays. At the height of the Empire’s prosperity, festivals, celebrations, and other opportunities took up nearly half the days of the year. Often, holidays lasted several days, as was the case with Lupercalia. A holiday intended to ward off evil spirits and purify the city by encouraging health and fertility, Lupercalia – celebrated in mid-February – could get a little crazy.

The celebrants were nude and often drunk (already starting to sound like Valentine’s?). The men sacrificed a goat and a dog (as you do on occasion), and then used the hide of these freshly slain animals to whip the women. Women believed that participation in the festival made the more fertile, and the festival was something of a spring fertility celebration, which you can see all around the world in a number of cultures.

Lupercalia continued to be celebrated for some time. Meanwhile, in the 3rd century A.D., Emperor Claudius II executed two men named Valentine on February 14th; those men were considered martyrs by the early Church. By the 5th century, the situation was a little better for Christians, and Pope Gleasius I created St. Valentine’s Day by merging it with the Lupercalia celebration; the idea was to overwrite and eventually abolish pagan celebrations by replacing them with Christian holidays. Lupercalia traditions continued, the Christians, at least, wore clothes.

Valentine’s Day Gets Some Class

The middle ages brought with it Chaucer and later Shakespeare, both of whom wrote about Valentine’s Day and the traditions associated with it. Rather than depicting Valentine’s Day as an occasion for celebration and debauchery, they romanticized the day as one of love and beauty. This view of the holiday spread throughout the continent, and soon tokens of love and affection became common for Valentine’s Day… like the gifting of handmade paper cards. 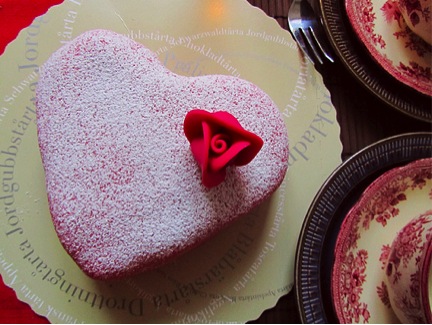 Fast forward several centuries, and the advent of industrialized manufacturing allowed these paper cards to be produced en masse so that everyone could easily celebrate Valentine’s Day, rather than taking the time out of their incredibly long work days – this was before organized labor and government regulations, mind you! – to craft a paper card themselves. Later, in 1913, Hallmark Cards began manufacturing valentines, and now we have our multi-billion dollar, global Valentine’s Day industry.

The next time someone calls Valentine’s Day out as phony, remember this little history lesson: Valentine’s Day started as a naked, drunken festival centuries ago, was praised by the great poets and writers of England in the Middle Ages and the Renaissance, and only became a little more… polished, shall we say?… in the 19th and 20th centuries. It’s a holiday with a long and storied history, and it has evolved with our needs and interests. Everyone needs love, after all, and sometimes we have to be reminded of that love. Fortunately, you aren’t limited to paper cards anymore. There are a million and one ways to show your affection to someone on Valentine’s Day, and most don’t even need an animal hide.

Why Choose Love Is A Rose?

Almost every gift can be personalized, but we love creating extra special personalized gifts not seen on our site. Just Call 630.393.1111 to create yours! If you're going to be in trouble and just need a great gift fast, we do provide the best personalized gifts without having to go the extra mile. Our exclusive Personalized Gold Dipped Roses will bring tears of joy and be forever remembered. They are perfect gifts for Anniversaries, Birthdays, Valentine's Day, Mother's Day, Christmas, or just because you love her! Our exclusive Personalized Family Trees are perfect Mother's Day, Christmas, or Anniversary Gifts for your parents. The family trees for 25th or 50th Anniversary Gifts are the most popular!

When you contact us a REAL PERSON will answer. There is NO AUTOMATED SYSTEM before reaching a real human. Maybe you need help creating a special personalized gift, or maybe you'd like to call in your order to ensure it gets processed ASAP. No matter what you need, we take pride in providing you the best customer service on the web from real people. So, call us at 630.393.1111 if you need assistance of any kind. Leave a message if it is after business hours and we will get back to you the following business day.

Sometimes life can get busy, and before you know it, an important event that calls for a heartfelt gift is only a few days away. Eh Hem, Men... Eh Hem, Anniversary... Luckily you found LoveIsARose.com. If the product you want is not available for Next Day Shipping online, or you just want to make sure your gift gets shipped as soon as possible, call us at 630.393.1111 and we will do everything in our control to ship your gift in time for your event! All ground shipping orders ship within 2 business days.

We ship gifts to countries worldwide everyday! If you don't see the country you're trying to ship to during checkout, give us a call and we will take your order over the phone! We also accept orders worldwide via email. If you're having trouble with our online ordering system, give us a call at 630.393.1111 and we will process the order manually.